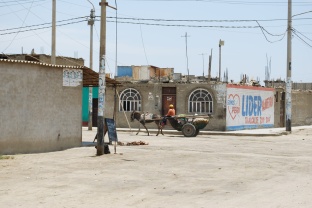 Chimbote, one of Peru’s principal fishing ports, is a slum town located about 250 miles north of the capital city of Lima. At one time the largest fishing port in the world in terms of fishing tonnage production, it grew from a sleepy little village of a couple of thousand people in the 1940’s to its present estimated population of some 350,000 people in a period of less than 20 years.  The poor who flocked to Chimbote seeking relief from the poverty of the mountains had their dreams shattered when atmospheric conditions, which caused the heavy concentrations of anchoveta fish in the waters of Chimbote, changed drastically, decimating the fishing production, leaving people in even more desperate economic straits. The fishing that does continue operates sporadically and unemployment has soared. These problems were compounded by a catastrophic earthquake in 1970 resulting in the death of tens of thousands of people and widespread destruction whose consequences are still felt by the population to this day. To these scourges were added in the early 1980’s ruinous floods resulting from unseasonable mountain rains in an area where rain was previously unknown, followed by a reign of terrorist activity in the early part of the 1990’s whose wholesale violence resulted in the deaths of thousands of Peruvians. The late 1990’s brought more disaster to Chimbote’s economy with the arrival of the Niño current which drove the anchevota fish from the area intensifying the poverty of Chimbote’s lower economic class.

The present rate of unemployment and underemployment in Chimbote is estimated at about 70%. Since the work for the majority of the population is temporary there has been little change for the better in the economic level of the poor and vast numbers continue to live in straw shacks or provisionally constructed huts without benefit of water, light or sewage. This lack of sanitation, along with deficiency in nutrition, has aggravated the already staggering health problems associated with slum living.

One thought on “Chimbote, Peru”